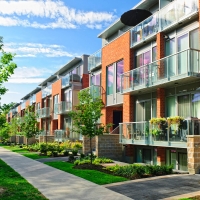 A mobile home fixed permanently to a foundation should be coded as a single-detached house (See Code 8.)

2. Semi-detached house – One of the two dwellings attached side by side (or back to back) to each other, but not attached to any other dwelling or structure (except its own garage or shed.) A semi-detached dwelling has no dwellings either above it or below it and the two units, together, have open space on all sides.

3. Row house – One of three or more dwellings joined side by side (or occasionally side to back), such as a town house or garden home, but not having any other dwellings either above it or below.

If townhouses are attached to high-rise buildings, assign Code 3 to each townhouse.

Also included are apartments in a building that has five or more storeys where the first floor and/or second floor are commercial establishments.

8. Mobile home – A single dwelling, designed and constructed to be transported on its own chassis and capable of being moved to a new location on short notice. It may be placed temporarily on a foundation pad and may be covered by a skirt.

A mobile home must meet the following two conditions:

It is designed and constructed to be transported on its base frame (or chassis) in one piece.
The dwelling can be moved on short notice. This dwelling can be easily relocated to a new location, because of the nature of its construction, by disconnecting it from services, attaching it to a standard wheel assembly and moving it without resorting to significant renovations and reconstructions.

9. Other movable dwelling – A single dwelling, other than a mobile home used as a place of residence, but capable of being moved on short notice, such as a tent, recreational vehicle, travel trailer houseboat or floating home.